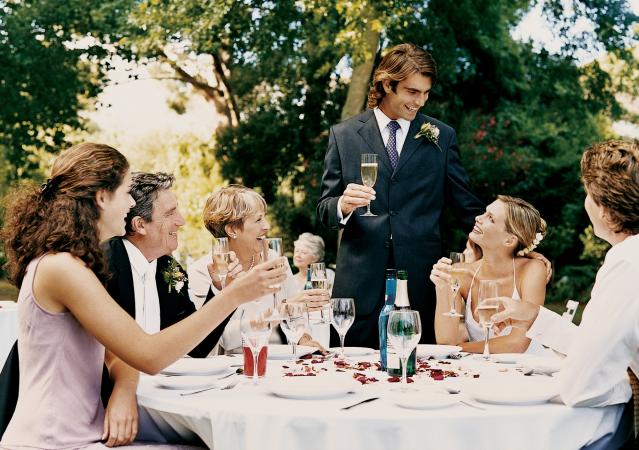 Good speeches are vital to everyone’s enjoyment of the wedding reception.
Yet a wedding may be the only time in your life you have to get up and speak in public.
No wonder you’re worried stiff! But relax – here are a few tips and guidelines to
help you prepare and deliver
a sincere, enjoyable and entertaining speech.

who will be speaking?
Discuss with each other, and your families, who will be making speeches during the wedding. There are no hard-and-fast rules here, some weddings have several principal speakers and then open the floor up for spontaneous contributions – though there are some dangers in doing this as guests might talk for ages or say something inappropriate. Other couples prefer just one or two brief speeches. One wedding I attended had no speeches at all, which was a real shame as in the end it felt no more special than a good party. Usual speakers are: the father of the bride, the groom and the best man.

when will the speeches be?
This depends on several factors, including the time of the ceremony, how desperate the audience will be to eat – a well-fed audience is far more responsive than a hungry one – and the preferences of the caterers and venue organisers. A good time is generally between courses. The guests have had time to eat and catch up with family and friends, and with food and wine inside them, they’ll be in a fine mood to be entertained. Having speeches after the first course will give the caterers time to clear away and prepare for the next course.

master of ceremonies
A good MC can be worth their weight in gold in terms of creating the right atmosphere, keeping control of the proceedings, warming up the audience, leading the applause, and encouraging the possibly nervous speakers. The role of the MC is rather like that of a ringmaster at the circus or a modern-day gameshow host, so choose someone who is naturally gregarious and confident, and known by many of the guests. The MC acts as a link between all the speakers, introducing them as they take the floor.

the welcome – who will do it?
By the time the speeches come round, most people will have met on an individual basis, but no one may have formally welcomed all the guests to the celebration. It is a good idea, then, to open up the speeches with a formal welcome.

Traditionally, as the ‘host’ of the wedding, the father of the bride may be the most appropriate person; if the MC is well known to all present, he can perhaps do it on behalf of both families; or maybe the groom himself.

special mentions
In the welcome, who warrants special mention? ‘The crowd up from Dunedin’ and ‘Great Aunt Sarah, just out of hospital’. This then leads to those unable to be here: ‘George and family on holiday in Europe’. And finally, if appropriate, those who have recently passed away. For example: ‘Wouldn’t Grandad have loved to have been here? Knowing him, he’s probably watching us right now with a cigar in one hand and whiskey in the other!’

logical order of speeches
There are no rules – but bearing in mind that not everybody knows both families, the following sequence is most common, and works well:
1
MC opens proceedings, warms audience up and introduces each speaker in turn.

2
Father of the bride welcomes all, then talks primarily about his daughter growing up, then the arrival of the groom on the scene, and ends with a toast to the bride and groom.

3
Father of groom (if speaking) will reflect mainly on his son growing up, and the bride appearing, ending again with toast to the bride and groom.

4
Bride (if speaking) replies to father, thanks parents, then talks about her favourite topic – the groom!

5
Groom replies to parents and then introduces us to the bride through his eyes.

6
Bestman. Finally, having heard all the family perspectives, we get to learn how it appears from the couple’s own age group and circle.

toasts
Again, don’t worry too much about ‘getting it right’ – it’s actually quite hard to get anything wrong at a wedding. Traditionally, the groom will propose a toast to the bridesmaids, but if the bride is speaking, it makes more sense for her to do this. The bestman replies on behalf of the bridesmaids and everyone will be toasting the bride and groom!

the speech itself
Keep the speech simple and sincere. Personal anecdotes that you enjoy recalling, and that illustrate the qualities of the person discussed, are the easiest to deliver and the most interesting to listen to. So, having opened the speech by thanking first the MC for his warm introduction, and then those you’d especially like to acknowledge such as parents or bridesmaids, move quickly on to those two or three personal anecdotes about the main person in your speech. For example, the father of the bride would tell a few stories about his daughter as she grew up, and then one about the groom appearing on the scene; maybe mentioning his first impressions of him…

If the speaker is the groom, then maybe one story replying to his/their parents, and a couple about his bride, such as how they met, the proposal etc.

After all the lighter stories and the humour, wrap up the speech by saying those magic words: ‘In conclusion…’ (it focuses the audience wonderfully!), and end by saying something from the heart – what you’d really like to say to this person on such an important day. End with an appropriate toast: ‘to my beautiful wife’; ‘to the bride and groom’; ‘to my wonderful husband’. And hand back to the MC. All in all, this should last about five minutes, leaving the audience gasping for more!

use of notes
It’s okay to use notes, but try to keep them very brief, just to define the main topics, the skeleton of the speech. Let the flesh of the speech, the actual words, come as you speak – don’t worry, life is impromptu! Use just a few key words written on index cards:
Always been headstrong – camping story (three years old)
Great in crisis – VW repair story
Chris arrives on scene – first impressions: asked for hand!
And finally… have fun – you’ll be great!